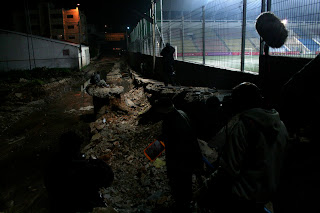 « The problem isn't that of liberty but of escape ».
(Gilles Deleuze, Felix Guattari, Kafka – Toward a minor literature)
Before starting to shoot the shortfilm, I spent two years in Palestine and Israel, looking for the necessary images to narrate a territory which is extremely fragmented and which is at the same time a unique mythical block, identified with different appellations like Palestine, Israel, Holy Land, depending to the enunciator.
I desired an ordinary story, one of a man who starts moving out of necessity. Abed is bound to constantly search for points of entrance and exit, until he gets lost in a territory which he doesn't recognize anymore, in constant mutation until becoming totally unknown. Denying the current political partition of the territory (Palestinian Territories and Israel are never mentioned, neither in dialogues nor in the titles), ARCHIPEL displays the constrictions, the difficulties of a mysterious journey, rejecting the use of the spectacular. There is nothing extraordinary in the organization of the oppression.
Stories grow out of places and the people living in them. The environment and the characters come even before the events. And if I take a person to an other place, which is unknown to him, a story is already happening. For the look that the person will have on things, for the interaction with people or possible encounters with other languages. These are two lessons of the Italian neorealism that are particularly dear to me. As well as the French new wave capacity to transform neorealist walks into escapes. ARCHIPEL looks for a cinema of forbidden passages, impossible walks and inevitable escapes.
GA
a 12:28